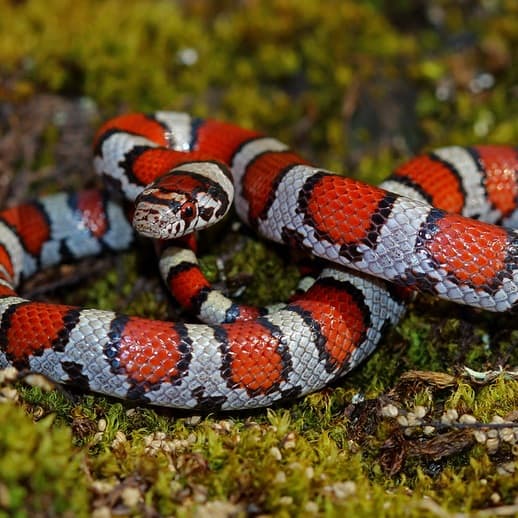 The milk snake is a nonvenomous snake that can be found in the Eastern and Central United States, in Canada and throughout Central America. Most commonly, it has patterns of red and white blotches or crossbands with black borders. However, several color variations of the snake exist, leading to confusions with some venomous snakes.

The appearance of the milk snake can greatly vary based on their subspecies or gepgraphic distribution. Generally, milk snakes are very colorful snakes and have strong patterns. In the United States, milk snakes usually have a white, cream-colored or yellow body coloration with several red, orange or brown crossbands or laterally stretched blotches with a black border. The snake often has red eyes with round black pupils. The belly is white or cream colored. Most milk snakes found in the United States have a lighter V-shaped or triangle-shaped marking in the base color of their body on their neck. Hence its specific name traingulum, which means triangle in Latin. Juvenile snakes have stronger colors and contrasts than older specimen. Red or orange colored milk snakes are often confused with the nonvenomous scarlet snake, the nonvenomous scarlet kingsnake or with the venomous coral snakes (depending on the location, the eastern coral snake or the Texas coral snake). A great way to distingusih between the nonvenomous snakes and the venomous snakes is that in nonvenomous snakes, the red color never touches another signal color (yellow or orange). Milk snakes always have a black border between white or yellow and red – coral snakes don’t.

Older specimen can tak on a darker color with the red colorations of their patterns turning into light orange or even dark brown. These brown specimen are often confused with the venomous copperhead and therefore killed. Here are a few ways to distinguish them: copperhead (and cottonmouth snakes) have an arrow-shaped head wider than the neck – milk snakes don’t. Copperhead snakes often have a differently colored head, copper colored. The body of copperhead snakes has camouflage-like colors and patterns, the milk snake has stronger patterns and contrasts.

Historically, it has been believed that milk snakes are drinking milk from cows as they were often found around barns. This is obviously nonsense but their common name has remained.

Milk snakes are nocturnal snakes and feeds mainly on small rodents and reptiles, such as lizards and other snakes. It is a constrictor snake that fixates its prey with a bite and wraps its body around it until it suffocates. The various subspecies of the milk snake have adapted to a wide range of habitats at various elevations. They are often found near cultivated areas. Milk snakes lead a rather secretive life, mostly hidden under rocks or logs and only leave their burrows at night. They are most often seen after heavy rains, when they emerge to the surface.

The milk snake is a nonvenomous snake. Its first instinct when a predator or human approaches is to flee or hide under rocks or tree stumps. Generally, they are hesitant to bite, even if threatened. In the rare cases in which a bite occurs, it doesn’t have any medically significant effects on humans or larger pets. Their teeth are small and they don’t dispose of any venom.

Milk snake range in the USA