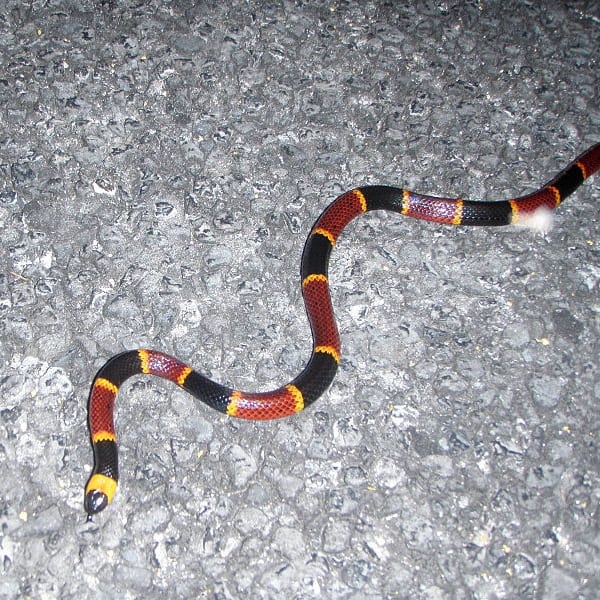 The eastern coral snake is a highly venomous snake that can be found throughout the Southeastern United States. It grows to an average size of up to 30 inches (75 cm). Its body is shiny and has alternating black, yellow and red crossbands.

The animal is strikingly colorful and shiny. The head and the neck are black with a broad yellow band over the middle of the head. Black and red crossbands are distributed very regularly along its body, which alternate and are limited to each side by a narrow yellow band. The tail does not have any red crossbands, black ones alternate with broader yellow bands. The belly is lighter colored, but shows the same pattern as the back. Especially specimen in southern Florida often have dark spots in the black rings along their bodies.

A great way to tell the venomous coral snake from other types.

Another identification mark is the distribution of colors of the snake. Also for this fact, several local sayings exist:

Red on yellow’s a deadly fellow; yellow on black’s a friendly Jack

If the red bands directly touch the yellow bands, you are looking at the venomous coral snake.

The main prey of the coral snake are reptiles such as lizards and other snakes, also younger and smaller coral snakes. The coral snake is mostly nocturnal and is rarely seen hunting or even basking during the day. When hunting, the snake lies in ambush waiting for prey to pass by in striking distance. As soon as an interesting animal has entered that range, the snake strikes with a quick bite and usually holds on to the animal and digests it as a whole. The potent venom quickly immobilizes the prey.

The coral snake disposes of a highly toxic venom. Theoretically, an adult snake carries enough venom to kill five humans – but it cannot inject a large amount of venom with one bite. Since the snake mostly hunts for small prey, its jaws are not built to bite large animals or humans. Furthermore, due to its mainly nocturnal lifestyle, very few bites from coral snakes occur. According to various sources, around 100 people are bitten by eastern coral snakes per year. Around 40% of these bites are dry bites because the snake is unable to inject its venom when biting into large objects.

Bites are generally not fatal but immediate medical attention is absolutely necessary. A medical professional will administer an antivenom to counter the potentially life threatening effects of a coral snake bite. Symptoms of a bite are local pain and swellings as well as gastrointestinal disorders and paralysis. In extreme and untreated cases, death can occur within 24-26 hours due to respiratory paralysis.

The coral snake can be found in various habitats throughout its natural range. Gererally, it is found at altitudes of around sea level up to a maximum of 1,300 feet (400 m). In Florida, the Eastern coral snake is mostly seen in the tropical hammocks as well as on üine or oak forests or glade lands. In Mississippi and Louisiana, the snake has adapted to a live in more arid, sandy creeks. In other areas, it is also found in open and scarsely vegetated areas.