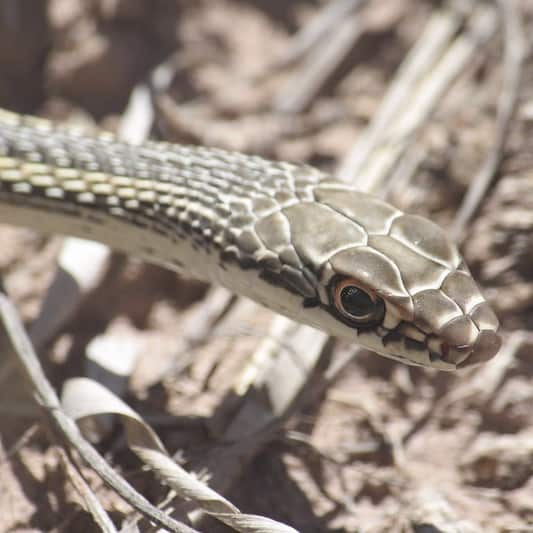 The striped whipsnake is a nonvenomous snake found in the Western and Southern United States and in Northwestern Mexico. It is usually a dark-colored snake with longitudinal yellow stripes on both sides.

The striped whipsnake is a long and slender-built snake. Its body coloration varies from grey to olive-green and reddish-brown to black. The snake has two lighter colored, often yellow, longitudinal stripes on both sides of the body, which extend over the whole length. The stripes often appear like a series of numerous thin stripes separated with thin black or dark stripes.

Striped whip snakes feed on lizards, smaller snakes and small mammals and birds. The whip snake can move very fast and has a characteristic movement, holding its head up to get a better overview of its surrounding. In order to escape predators, the animal can quickly disappear into crevices or caves in the ground or climb on trees. They are diurnal and very skilled hunters and even feed on small rattlesnakes.

The striped whipsnake lives in forests, steppe areas and grasslands as well as in mountainous areas up to an elevation of 10,000 feet (3000 meters).

The striped whipsnake is a nonvenomous snake species and does not pose any risk for humans or pets. Getting close to an animal in the wild can even prove difficult as they will quickly escape or hide from any approaching predators – or humans. Even in the rare cases when the snake might bite when threatened or when it is handled, it will not have any medical significance.

Striped whipsnake range in the USA

Currently, two valid subspecies of the striped whipsnake are recognized: