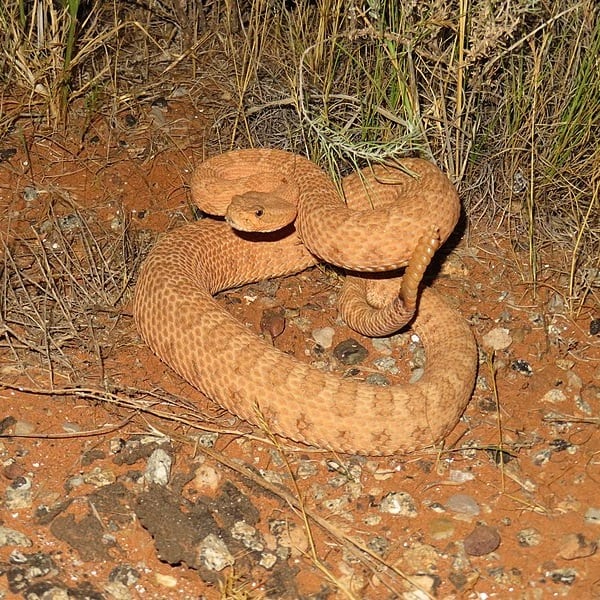 The midget faded rattlesnake is a small venomous snake found around the basins of the Colorado River and the Green River. Cortalus concolor is commonly also called the yellow rattlesnake.

The base color of the midget faded rattlesnake can range from a yellow brown, light brown to even reddish or pinkish. The body is adonred with several darker colored, usually brown blotches that can be rectangular or elliptical in shape. It common name faded rattlesnake comes from the fact that the color patterns of adult specimen are usually faded, often not visible at all anymore. The color pattern of juvenile snakes is normally stronger and well-defined.

The head of the snake is triangular-shaped and broader than the neck. It therefore looks like an arrowhead. This is true for all venomous rattlesnakes and a great way to distinguish them from non-venomous look-alikes such as the Pacific gopher snake (bullsnake) or the western hog-nosed snake. The rattle at their tail tip is another identification mark for a rattlesnake.

The midget faded rattlesnake is the smallest snake of the rattlesnake genus Crotalus. It is even smaller than the sidewinder rattlesnake. An adult snakes reach a size of 20-30 inches (50-75 cm).

If you are bitten by a midget faded rattlesnake, you need to get medical attention immediately. Try to remain calm. Do not tie off the affected area and do not stop any potential bleeding. Try to keep your heart rate as low as possible and get medical attention as soon as possible. The person who got bitten should move as little as possible. Either take a car to the nearest hospital, or if you are on foot, call an ambulance.

The faded rattlesnake occurs in arid grasslands and sagebush steppe habitats. It is an opportunistic feeder and feeds on all smaller animals found in its natural range. Adults prefer small rodents while juveniles feed mainly on reptiles. When hunting, the snake lies in ambush until a suitable prey animal is in striking range. After injecting the venom into the animal’s system, it will quickly be paralyzed. The snake usually holds on to reptiles and small mammals and eats them whole, head first. Larger mammals often manage to escape after the bite. In this case, the snake follows the heat trace of the animal that will quickly pass out from the venom and eat it head first.

The midget faded rattlesnake is found in an around the basins of the Colorado River and the Green River. Its range stretches from Southwestern Wyoming, Eastern Utah, and Western and Central Colorado.