Environmentalists are concerned that the brown tree snake would one day be able to establish a stable population in Hawaii. So far, that has not happened. The brown tree snake is a mildly venomous snake originally found in Southeast Asia that has become an invasive species in Guam. The snake is a skilled climber and feeds, among other things, from birds eggs. With this behavior, the snake has wiped out a large portion of birds in Guam. Individual specimen of the brown tree snake are sometimes found in Hawaii. So far, they have only been considered single animals that have made their way to the island on ships from Guam.

If you have encountered a snake in Hawaii that is not yet on our list or that you cannot identify yourself, we’ll be happy to identify it for you. Simply take a picture of it and upload your picture, a quick description and the U.S. state where it was found here on our snake identification page.

As mentioned above, the only venomous snake in Hawaii is the yellowbellied sea snake. If you want to learn more about this snake species, just click on the link below. 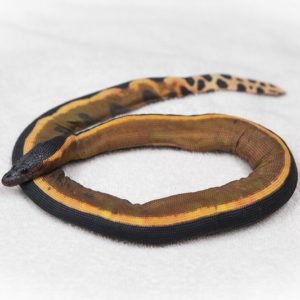 The yellow-bellied sea snake, hydrophis platurus, is a venomous sea snake and probably the most common snake species around the ...
Read More

Next to the venomous sea snake, three non-venomous snake species can be found in Hawaii: the racer snake, the common garter snake and the Brahminy blind snake, also called the Hawaiian blind snake. They have all been introduced by humans, as Hawaii does not have any native snake species. Coluber constrictor, commonly called the eastern racer is a nonvenomous snake species. The species contains eleven subspecies that can be ...
Read More The common garter snake is the best-known and most widespread species among the garter snakes. It can be found throughout ...
Read More